Hello there! Welcome to the brilliant green shrubbery, mouth-watering food, and unbelievable hospitality of… NEW JERSEY! Yes, we have jumped back across borders, back to New York City, and back to my parent’s farm in the lush New Jerseyan countryside. Out of India, but we have perhaps 75% of our journey still to talk about, so we shall truck onward, push forward, and update this blog as frequently as possible (clearly, not too frequently).

So, without further ado, back to India we go…

Joining in a shared tuk-tuk for the short ride into town with Fernando and Francy (Hondurans living in Philadelphia) and about ten other locals, we quickly realized the lovely couple were also staying at the same guesthouse. Nice. The F-couple, as I quickly dubbed them, are SUPER awesome people who were the ONLY travelers we met taking the same route as us through India. Around this time of year, everyone heads from the beaches in the south to the mountains in the north to escape from the rising temperatures. The F-couple and Manny and I? We all made the fateful decision to go south and meet the heat headfirst!

So, of course, Manny and I bonded quickly with the duo, spending many days with them as we bounced along a similar path across India. 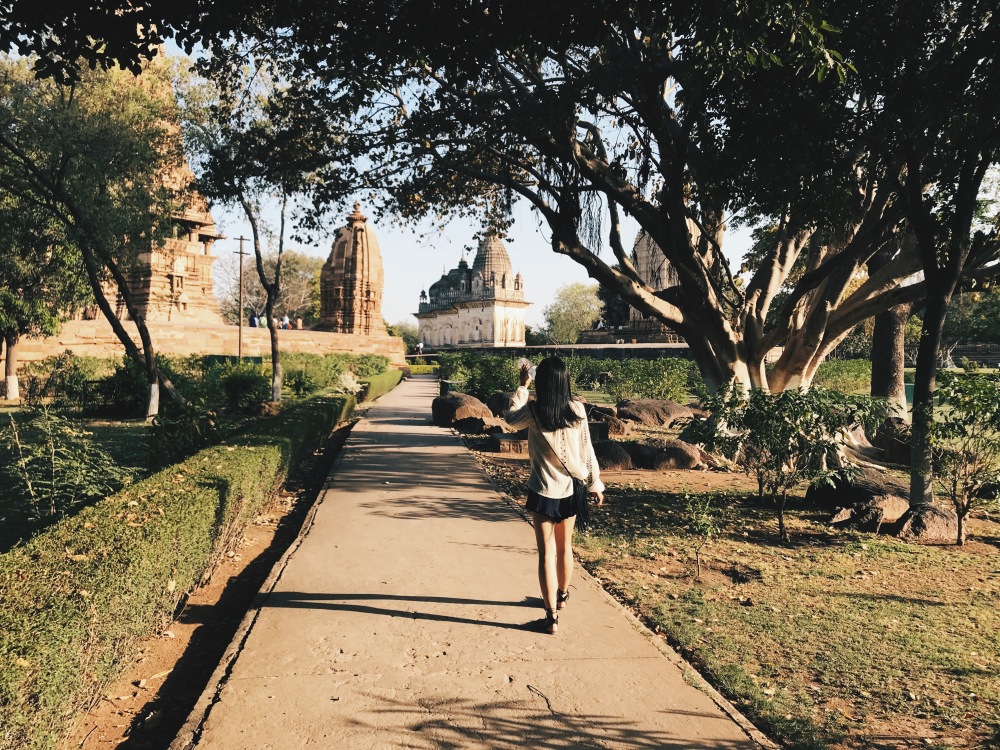 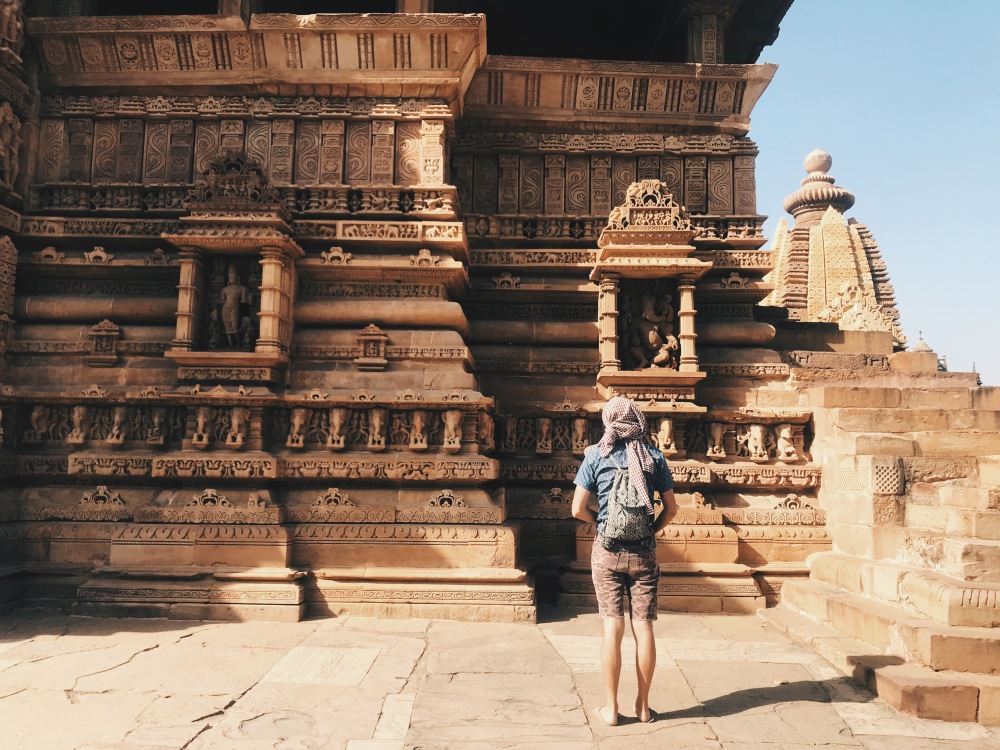 Khajuraho is small – absolutely tiny by Indian standards – and impossible to walk through without being hailed every minute or two by a shopkeeper who wants you to check out their wares, touts who want to sell something (usually sex-related like a book of Kama Sutra poses), or other locals who just seem like they want to chat. It’s nice to be the center of attention (don’t most of us like this?), but positively draining to go through the same conversations over and over, say no to going into the shops selling the same things you don’t want over and over (“Just look, free to look, no buy”), and run into the same people about five times PER DAY. (Since the main part of town is only two streets, we often would run into someone, excuse ourselves, get hailed by another local immediately, excuse ourselves again, walk around the corner and run into the 1st person once again!)

Most people are really nice and you can understand that they either need to make some money or really do just want to spend a few moments chatting, so it’s okay, but not every interaction is full of pleasure. And, unfortunately, some of the most unpleasant moments of our time in India happened in this small town.

Everywhere across India, you are going to find lots of guys. Over there is a group of five guys, over here is a group of ten, or twelve or even fifteen. Males are more coveted than girls in many Asian cultures (or, who are we kidding, much of the world…), and through a combination of abortion and infanticide many places in India hover around 9.5 or so women per 10 men, while in the Punjab it’s closer to 9 women for every 10 men, in Delhi around 8.5 women per 10 men, and in the small territories of Daman and Diu, a mind-blowing 6 women per 10 men. Now take into account that women will often have jobs that keep them in the home and off the streets (seamstress, cook, cleaner) and the amount of guys that are visible at any given moment is staggering.

The guys are everywhere, the women aren’t, and perhaps this led to some of the unwelcome attention Manchit received during the trip. (Also, of course, we stick out a bit.) While the vast, vast number of people (guys/girls) we met were amazing, there were still enough instances of impropriety that occurred when I was standing next to her, that make India stick out like a sore thumb compared to any other country we have visited. If that is what happens when I am nearby, what happens to women who are traveling solo through the country?

Most people we met simply wanted to have a chat and then move on with their business. So, when we met a pair of locals who were extremely insistent on us hanging out with them, we let it go as simple curiosity. Sure, they called and texted multiple times per day, every day, but we just ignored most of their messages. (We have found this to be easier than constantly saying “no” to their requests) Things got a bit weirder when we realized they were waiting outside the hostel our friends Jai and Prerita were staying at. They had seen us enter the hostel, assumed that was where we were staying in town, and then followed us when we left the building to wherever we were going next. This happened a couple times (How are they ALWAYS there?) before we realized they were sitting across the street staring at the entrance until we appeared. Even more annoyingly, they appeared one evening with some jewelry for Manchit and one rubbed her hand/fingers in a way that only suggests their motives were anything but pure, (I didn’t see it or would have slapped him) before following us to a nearby restaurant and watching us from the street for more than two hours while we ate with a group of friends.

On the last day, we sped off in a hired tuk-tuk to catch an early morning train. The two locals knew when we were leaving (it was the only train) and as our tuk-tuk passed the hostel they thought we were staying at, the two ran out to the road and came to us. Our tuk-tuk driver began to slow down, but we told him to “Don’t stop, go go go!”

Kind of an odd experience, a bit creepy with the following and waiting for hours for us, but it could (possibly) be explained away by simple cultural differences. Not so much in other instances in Khajuraho.

We rented two bicycles to ride around the nearby villages so we could visit the various temples. Coming to the first temple, we spoke briefly to a young boy (perhaps 10?) who was selling typical tourist junk we didn’t want. Nothing too different there. We go in, we come back out, I jump on my bike and start pedaling away when Manny comes up to me on hers and says the young boy asked for a kiss (she said no) and then grabbed at her breast. I hear the story, turn my bike around, and instantly lock eyes with the young kid.

The kid takes off running around the side of the temple and I give chase on my bicycle. I can move a lot faster, but since I am a couple hundred feet away and must follow the path, he is able to run all the way around the temple to the back before I can get to the same point. Behind the temple, I find three or four horrifically dilapidated wooden shack home. Mud floors. Crappy roofs. A couple of chickens in the dirt yard. I don’t know which home the kid ran into so I approach the first woman I see, a heart-breaking example of poverty in modern India.

I’m standing there, making motions and trying to get across my point that I am looking for a kid, while she is looking at me with a completely blank expression. She has no idea what I am trying to say and when she opens her mouth she reveals a gruesome, unholy mess. Teeth are pointing up, down, left, and right with seemingly no idea which way they should go. Kind of like those deep sea fish that seem to have been created solely to inspire nightmares in children.

I want to smack this kid for groping my girlfriend, but my mouth-foaming anger (mostly) melts away when I see this kid’s home. Yes, he clearly knew he had done something wrong, but the extremes of poverty facing this child and the immense disadvantage he faces when compared to most of the world (or even compared to many of his fellow Indians) means that part of me just wishes there was a way to get him a better education. Maybe he would still be a little shit if he was given better schooling, or maybe he would be something else. Something different. Something better. Who knows?

I waited for a few minutes outside the group of homes to see if he would reappear, and then I went back to Manny. Still a bit angry, but now mostly at myself for being too far away that I wasn’t able to protect her adequately. And this was a lesson that we had to learn and relearn in India time after time.

For a while, I would try to have Manny walk ahead of me and we would try to avoid large groups of people in confined areas, but, inevitably, after a few days or a week without any problems, we would drop our guard and something would happen. Over the course of two months in India, and at all times when I was nearby, Manny was inappropriately touched, grabbed, or groped about 12-15 times. About half of these instances were during the Holi festival in Delhi or other local festivals we stumbled into during our travels. The rest generally occurred in other crowded places like buses, especially in the hectic moments when people are rushing to get on and off. For what it is worth, Manny was touched one time in ten days of traveling in Sri Lanka, and she was never touched in any of the other places we have visited together (Germany, Poland, United Kingdom, New York City, Hong Kong).

Khajuraho sticks out in our minds for the before mentioned issues (and a handful of others), but also because it was the place where we met some of our favorite people from the entire trip: the F-couple and husband and wife power duo Jai and Prerita. Jai and Prerita (somehow) convinced the rest of us to wake up around 5am so we could take a tuk-tuk 40 kilometers through the darkness and be the first ones into the Raneh Falls nature park. Our skepticism (and tiredness) subsided as we watched the sun rise above a huge expanse of rock peaks and valleys – a sight completely hidden by cascading water during the rainy season. 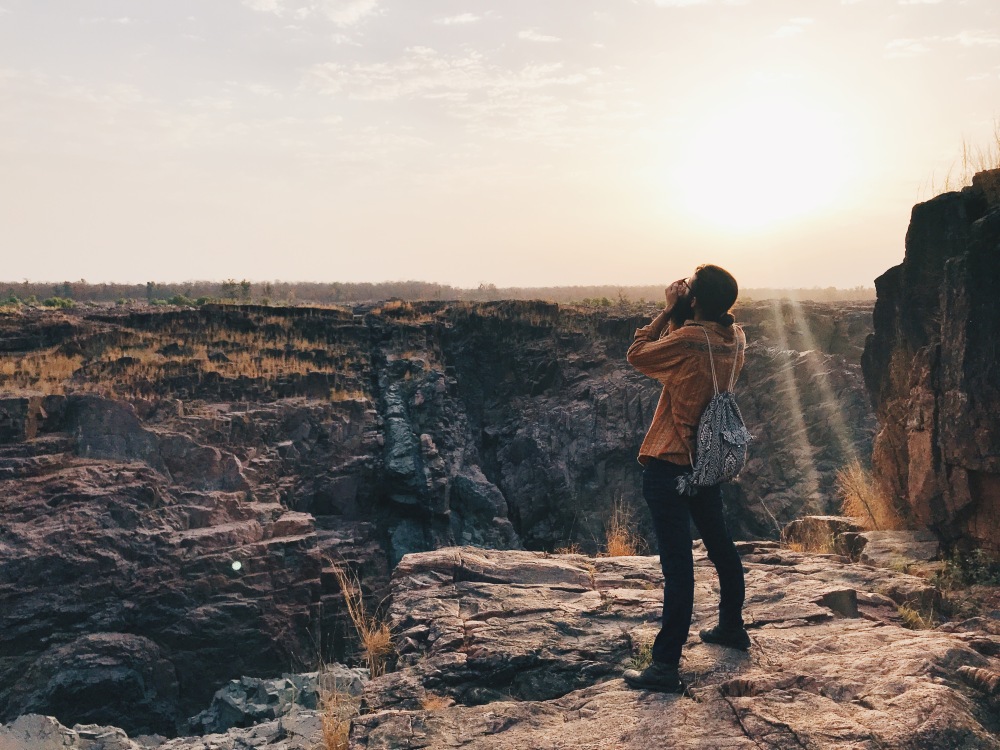 So, no real “waterfalls” to be seen during the dry season, but we get crazy rock mountains? Not a bad trade off. The rest of the morning was spent looking at deer, various birds, and what we were told was a baby crocodile, but I am still convinced was actually a stick (“Oh, you mean that stick? Is that supposed to be a crocodile…?”) – good fun! 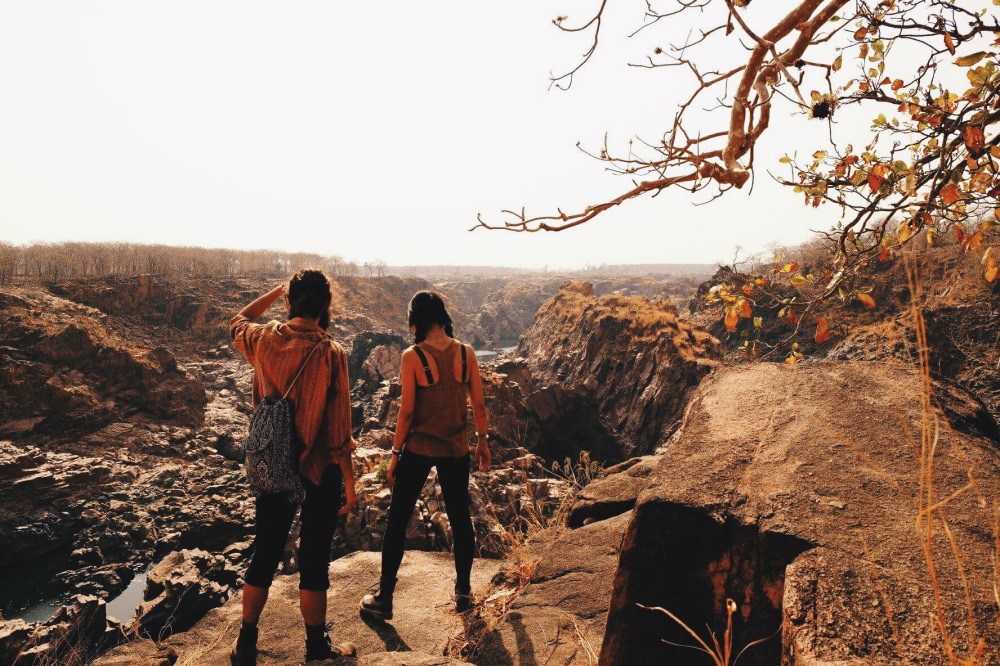 We spent so much time hanging out, hiking up and down rock mountains, sleeping, and eating that it wasn’t until our third day that we finally began to check out the area’s famous temples. The carvings are absolutely spectacular. Thousands upon thousands of intricate designs, many of which are about a century old. Although these temples are known for their eroticism, the vast majority of pieces are not related to sexuality. Kings and queens, noble people, elephants, bulls, and all kinds of metaphorical symbols cover the temples from top to bottom. So, it’s even more jarring when you turn a corner and spot a four person (and a horse) gangbang adorning one of the majestic walls.  Those ancient Indians really knew how to have a good time! 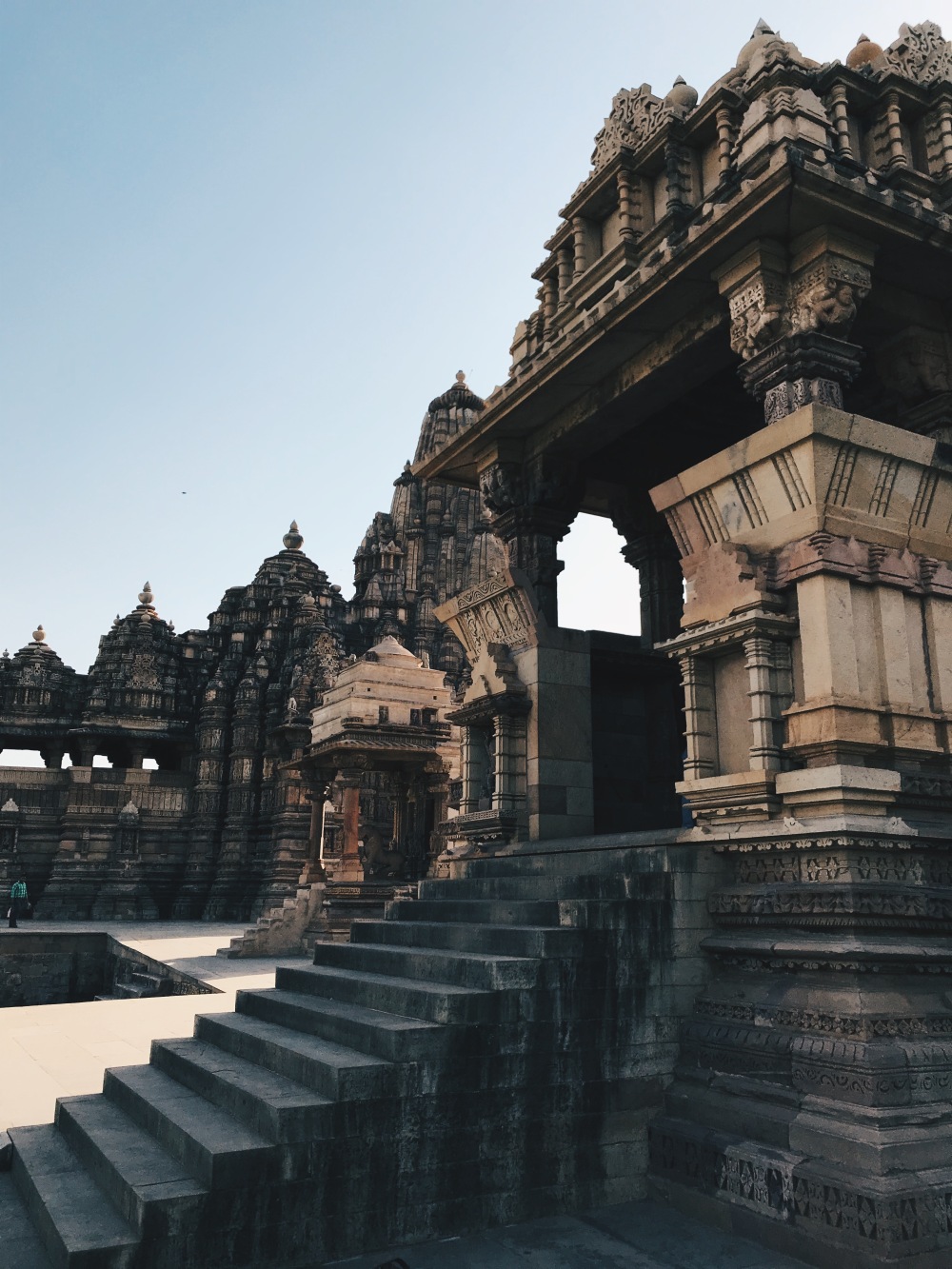