Not completely satisfied with the minor dunes of our day tour, we left Tozeur and headed south across the massive Chott el Djerid salt flat to the smaller town of Kibili, yet another “Gateway to the Desert,” where we stayed with Arafat and his family on their campsite. (We stayed in a room on the third floor of the building.) The huge campsite had room for 30-40 separate tents, 8 or 10 communal bathrooms, a large communal dining area, and… no tourists at all. Arafat once cared over the thriving campsite, hosting hundreds of foreigners over the years, but recent times have been much harder. The huge site lies mostly dormant. The campsites empty. The grounds are quiet. In the absence of tourists, Arafat subdivided some of his land so he could rent it out to a hardware business, and he opened a small shop at the streetside as well. But the greatest change to the property is apparent in every direction when you step foot on the land: dates. Crates upon crates upon crates of DATES in every direction. Neither Manny nor I are huge fans of dates, but we felt compelled to eat as many as possible when Arafat greeted us with a huge bowl when we arrived! Kibili, Tozeur, and the surrounding areas are famous across Tunisia (and the world) for their dates. At times, it seems as though EVERY shop is a date wholeseller. SO MANY DATES EVERYWHERE. Head out of town, all you see are sand dunes, the salt flats, and MORE DATES. DATES DATES DATES. Arafat’s date plantation is doing as well as expected, but seeing how the entire community seems to also sell dates, it’s apparent times were better when he was earning the majority of his income from tourism.

The next day, we took our second desert tour, this time with Arafat leading us around. In our minds, we came to the desert for dunes. Massive dunes in the middle of nowhere as far as the eye can see. But as we learn time and time again, what one person expects is not necessarily going to be what they are given – especially when in a foreign country and communicating in languages that one or both parties are not completely proficient in. So, the first inkling the tour would not take us to the DUNES of our dreams was at 7am: Arafat brought us outside after breakfast and invited all present at the home to climb aboard a Camry and another small passenger car: Arafat, Manchit and I, Arafat’s wife and their three children, and another couple and their two kids(!!!). No crazy deep desert expeditions are in the cards for today! 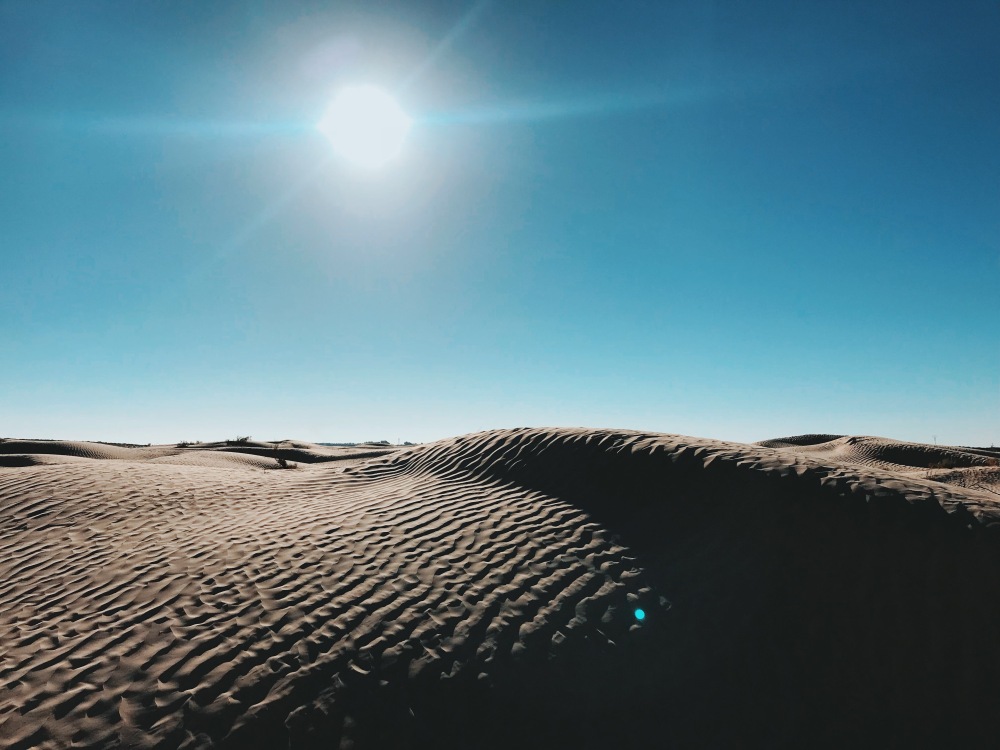 Once we (or rather, I, as Manchit was serene as always) got over the shock/disappointment, we had an amazing day – of course completely different than a traditional tour. I’m not actually sure that the festivities of the day wouldn’t have happened even if Manchit and I had not been present, but that’s fine. The day was still great. It kind of just felt like we were taken along to hang out with two Tunisian families, not too different from some other experiences with locals we have had – only this time we were paying for the “tour”! We visited some minor spots less interesting than the previous 4×4 trip, then joined with another ~10 or so of Arafat’s friends and their children at (of course) a date plantation for lunch near the Algerian border. After cooking bread in the sand in the traditional Berber method, we had a huge meal under some set-up tents in the camp. The families were incredibly nice, and cut off a huge bough from a date tree as a gift for us. This thing probably had ~40 pounds of dates on it! We planned to leave the next day, what could we possibly do with so many dates?!?

After the meal, we went with Arafat and one of his young sons back to Kibili and walked up a small mountain/hill for sunset views of the surrounding area. Nice day, beautiful place, lovely people… but the search for DUNES continued! 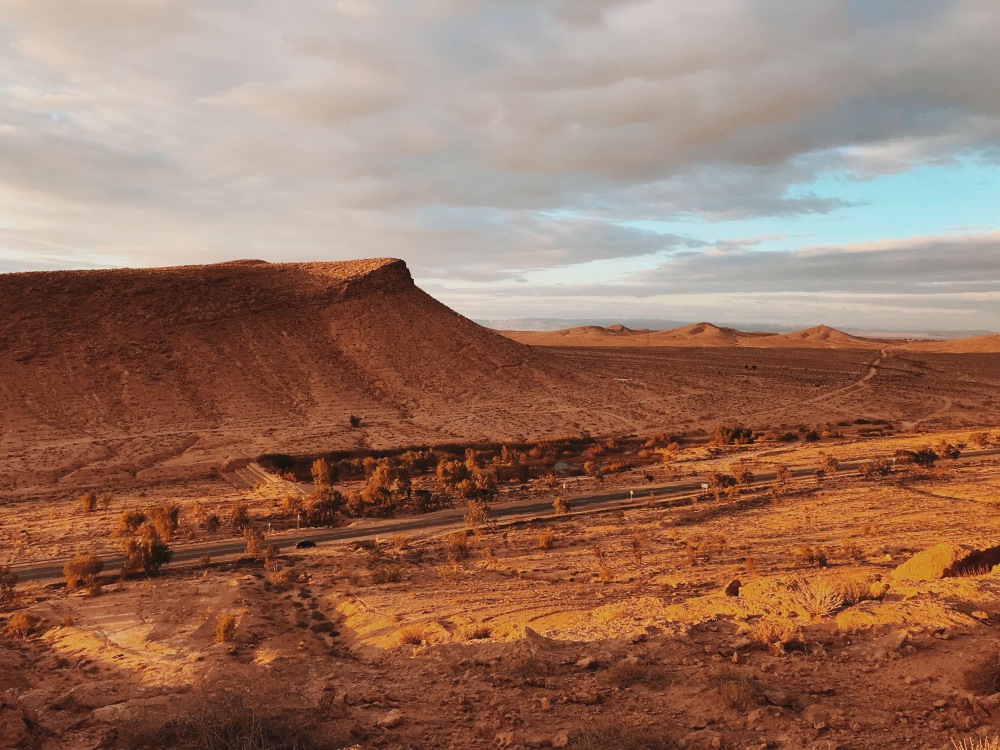 Leaving the next day for Douz, (why, yes, it IS “The Gateway to the Desert”!) we found ourselves accommodation for the night, supplies, and spoke with everyone around town about a tour into the desert – the REAL desert. Sand dunes. HUGE SAND DUNES. The problem is, everyone we speak to promises the world, so who knows what we will get? We finally choose some guides who interest us in a 4×4 overnight trip to the desert mountain of Tembaine then continuing onward to our next destination, the Star Wars filming site and location of hundreds of traditional underground homes, Matmata.
The next day, the now-familiar tour script continued. After picking up some desert necessities, Manchit and I and our two guides/drivers headed off on a sandy desert track into the Sahara. Sometimes the road was packed rock and accessible for any kind of vehicle, sometimes the track took us straight over some small to medium sized dunes (much more interesting). In any case, we threaded our way onward past more travelers than we had seen anywhere else (still not many, to be clear). At one point, we came across a motorbike group that raced around us, flying up and around the dunes that we mounted at the lowest junction. I gazed out the window, envious of their speed and freedom as we methodically moved along on the path. By mid-afternoon we made it to our final desert destination, the mountain of Tembaine. We had failed, once again, to have come across the grand dunes of Saharan lore!

The table-top mountain rising from the sea of (small to medium) dunes was impressive, and we climbed to the large, flat peak without too much difficulty. Above the desert, we peered down upon the infinite waves of sand and pranced around like conquistadors of the New World, our eyes ravenously devouring landscapes strange and wonderful. After exploring the area and ascending an ajecent sand hill/mountain to watch the sunset, we returned to the campsite. An old Berber materialized out of the darkness and chatted with our guides as they cooked more bread in the sand and slow cooked a stew in a ceramic gourd of sorts (one time use, they broke it in half to retreive the meal inside). The old man then brought out a handmade desert flute and played some odd tunes beside the light of the fire. 90% of it sounded as if it was the first time he had put the instrument to his lips and was trying to figure out into which holes to blow. There was no melody, no tune, just some screechy warbling that reverborated around the campsite, bouncing off nearby Tembaine mountain. Our guides sat in silence drinking warm beer and chain-smoking cigarettes, giving no indication if the sound was good, bad, normal or if they even could hear it. After about 10 minutes of the warbling (maybe much less, but time seems to slow down in these instances), the old man transitioned into something that actually sounded like a song – then stopped playing entirely shortly afterward.

I wonder if the locals sometimes act like this just to see if the tourists are completely clueless about the the culture, music, food, etc. of the area. Sort of the flipside to that famous story about Ravi Shankar in the 70s. A bunch of concert-goers listen to Ravi and his sitar for the first time and give him a rapturous applause when he finally pauses – only for him to remark he had been simply tuning his instrument and hadn’t started the concert yet! 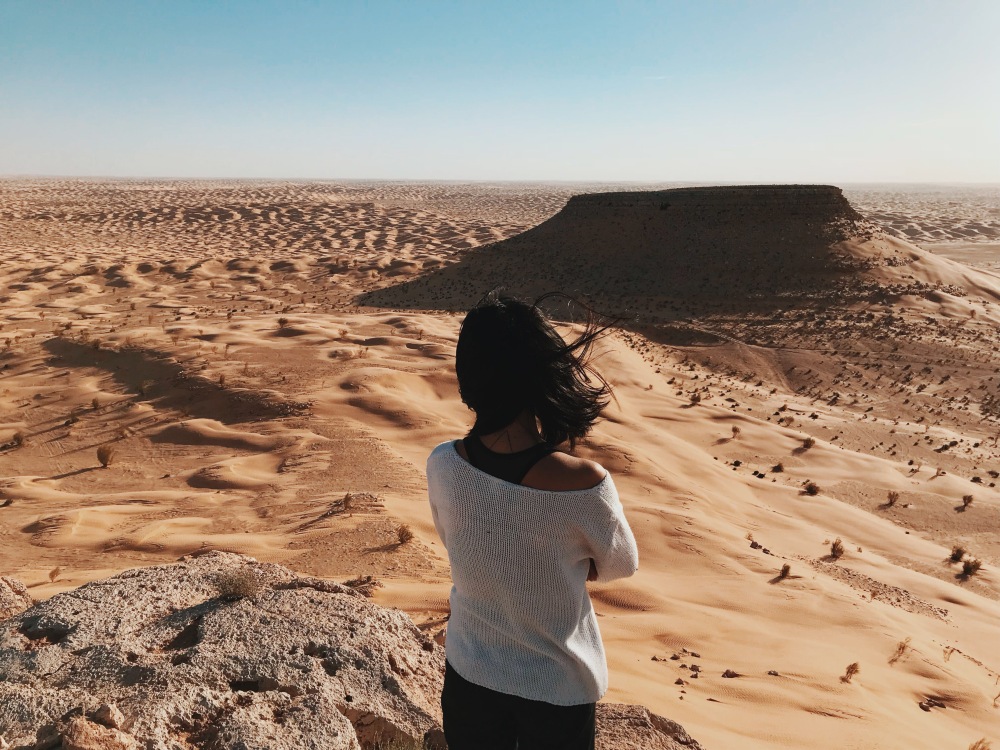 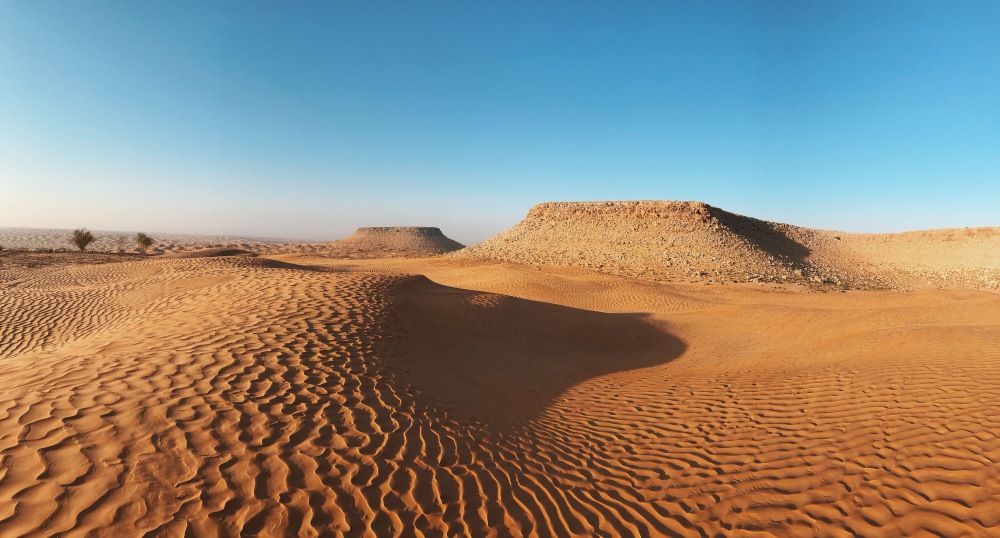 The next day, we packed up and drove for a few hours over the dunes and upon a packed rock road, reaching an old Roman forum at the edge of the desert. Onward still to the tourist oasis stopping point of Ksar Ghilane, containing a huge and very empty network of tents for travelers entering/leaving the desert. Back to the main road, the expanse of sand was quickly left behind, yellows being replaced by a pallatte of dull greys as the terrain slopped upward and hills and mountains began to rise around us. 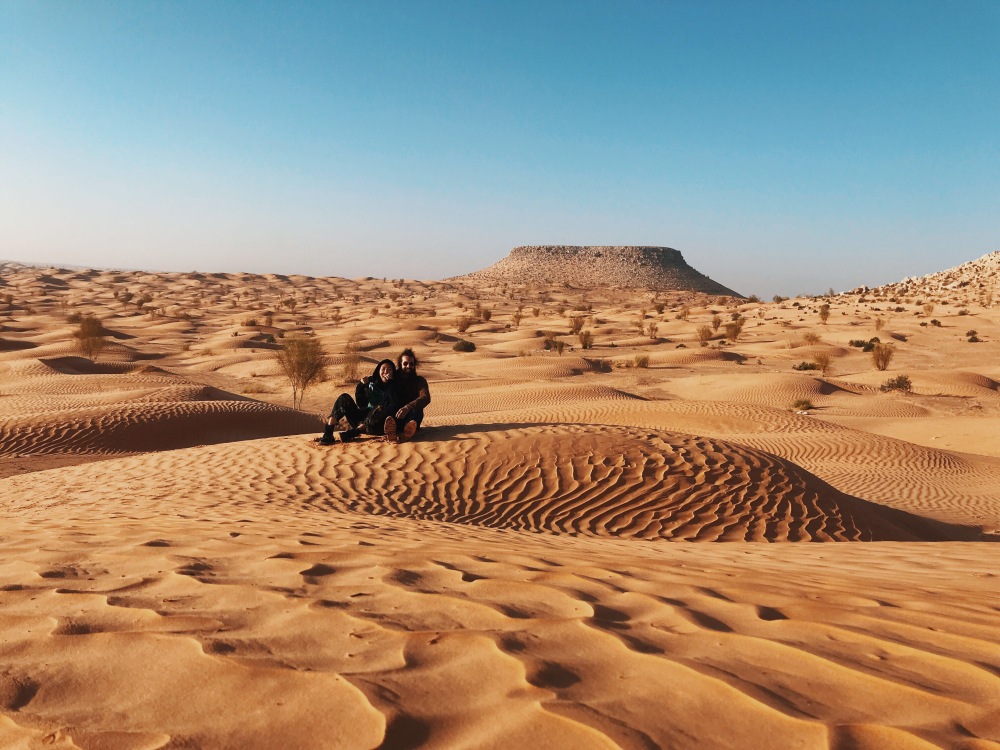 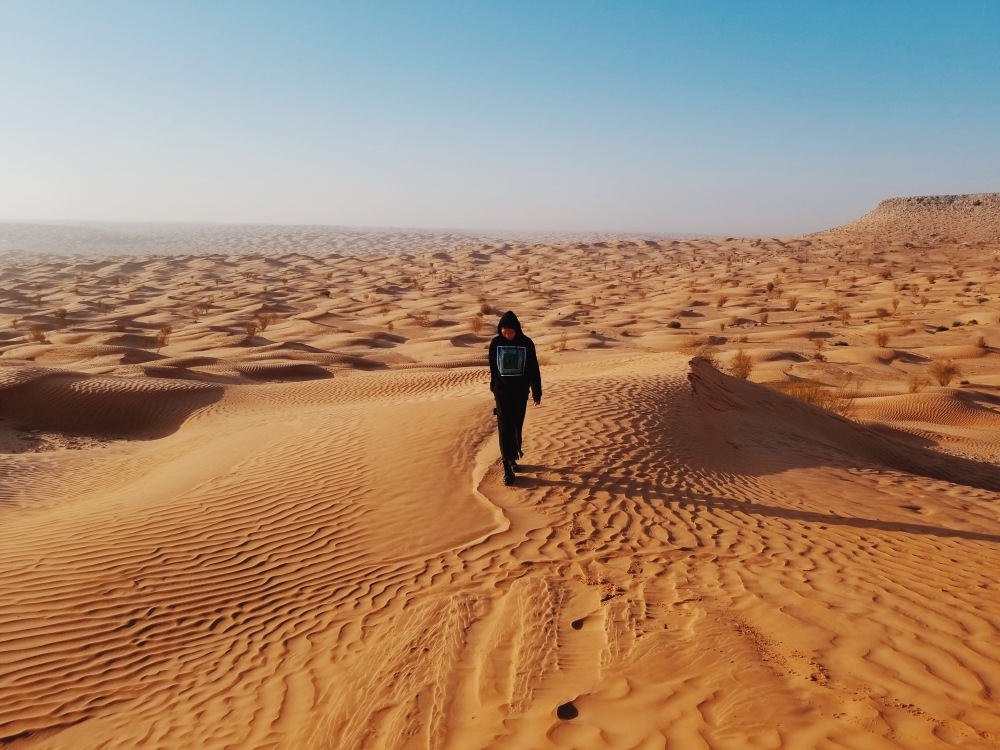 By early afternoon, we had reached the world famous (to hardcore Star Wars fans anyway) Sidi Idriss Hotel. (Or perhaps it is Sidi Driss. The name seemed to go back and forth depending on who you asked.) It’s not much as a place of comfort (no windows or WiFi in the rooms, communal bathrooms, bit more expensive than other hotels), but that isn’t why tourists from all over come. The hotel is built from the traditional “troglodyte” underground homes. Due to the oppressive heat much of the year, the locals built their homes underground and into the sides of the mountains – deeper and deeper into the soil to escape the ever burning sun above. Star Wars fans will instantly recognize the hotel from the original film (a fact that the hotel advertises extensively, day-trippers arriving to see the “memorabilia wing” of the hotel. Regardless if you are a Star Wars fan or not, the hotel is just an awesome place to stay for a night or two. Not only is it cool to stay in such a weird looking, alien-like place, but the food was great (the chef seemed to be overjoyed to finally be cooking for guests again!), the staff was amazing (the non-English speaking receptionist waited until we came out of our rooms ~8am to crank up the Arabic electro music and have an improptu dance party), and there was BEER! Awesome, awesome place and a beautiful area. Outside of the hotel, we climbed up the hill that overlooked the town, taking time to peer down into the numerous underground homes scattered around the area (a slightly voyeuristic feeling to look down into the personal dwellings, but oh well…). 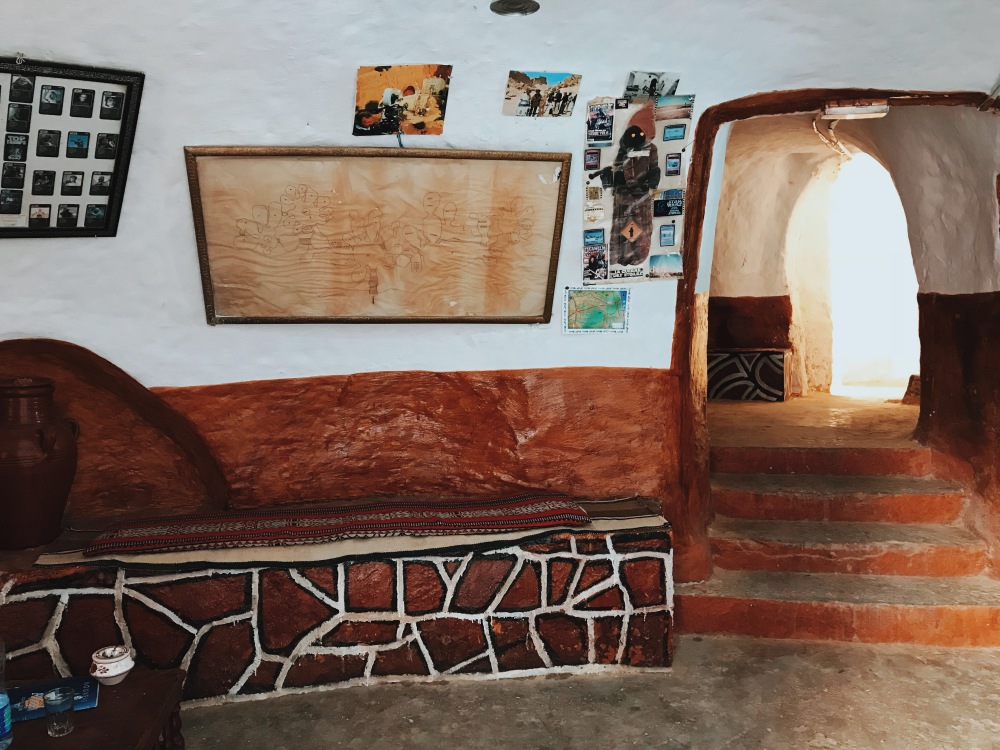 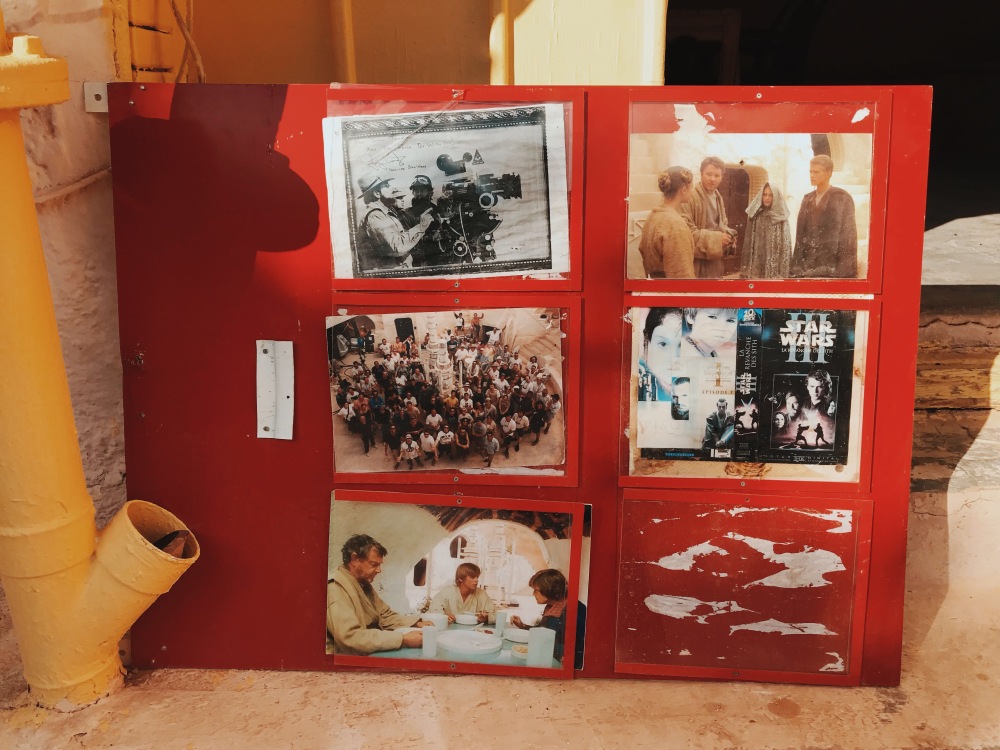 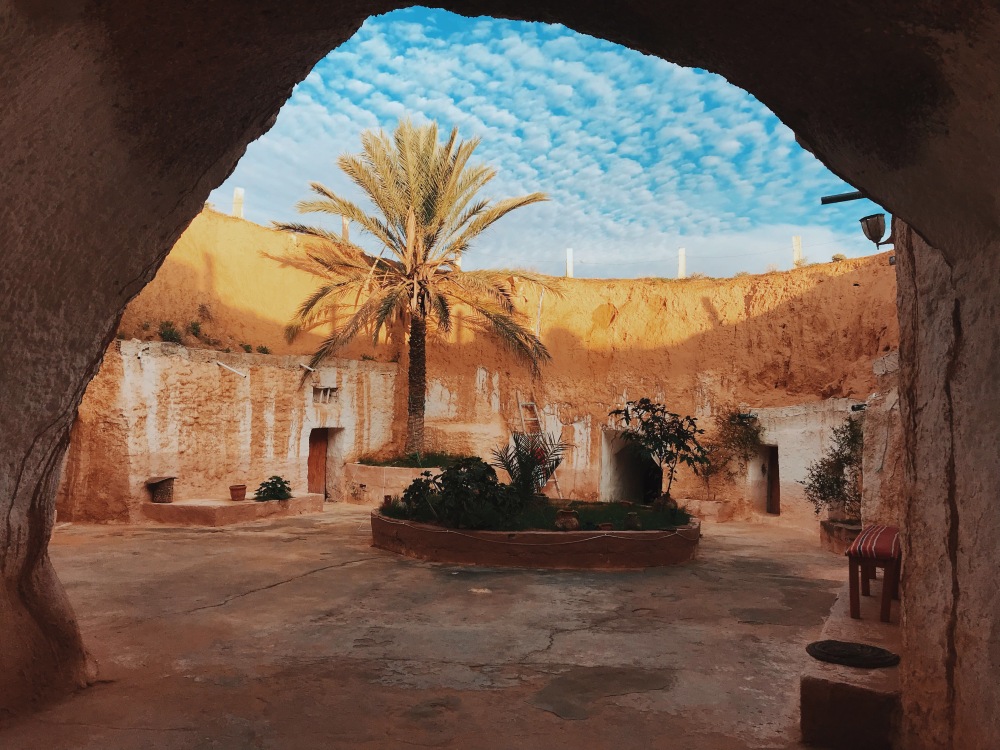 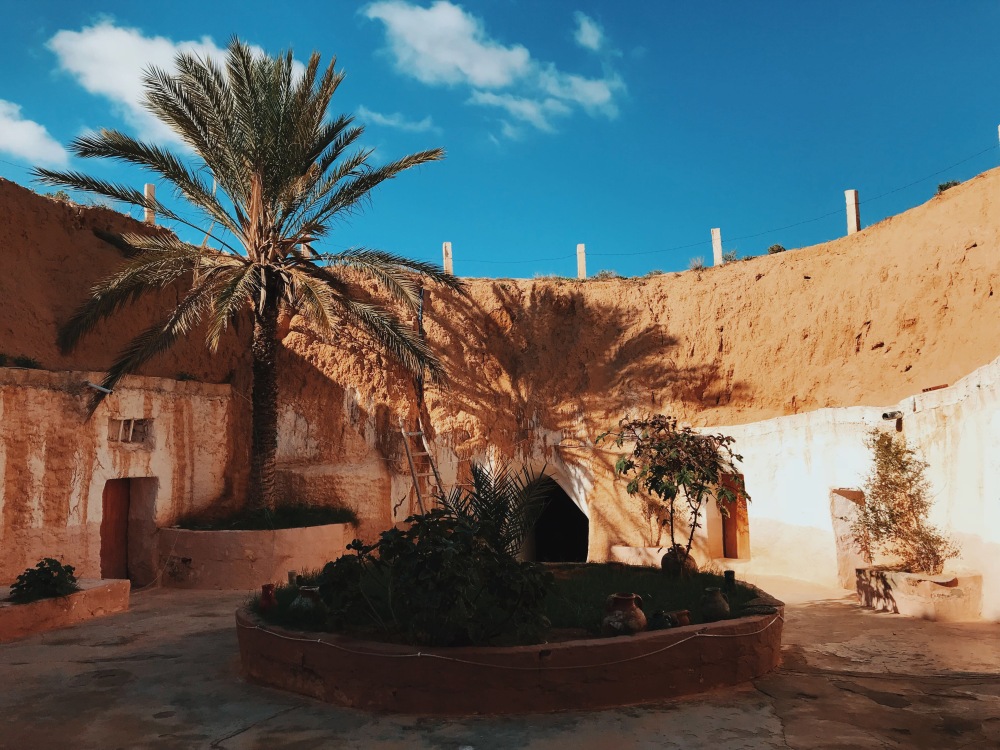 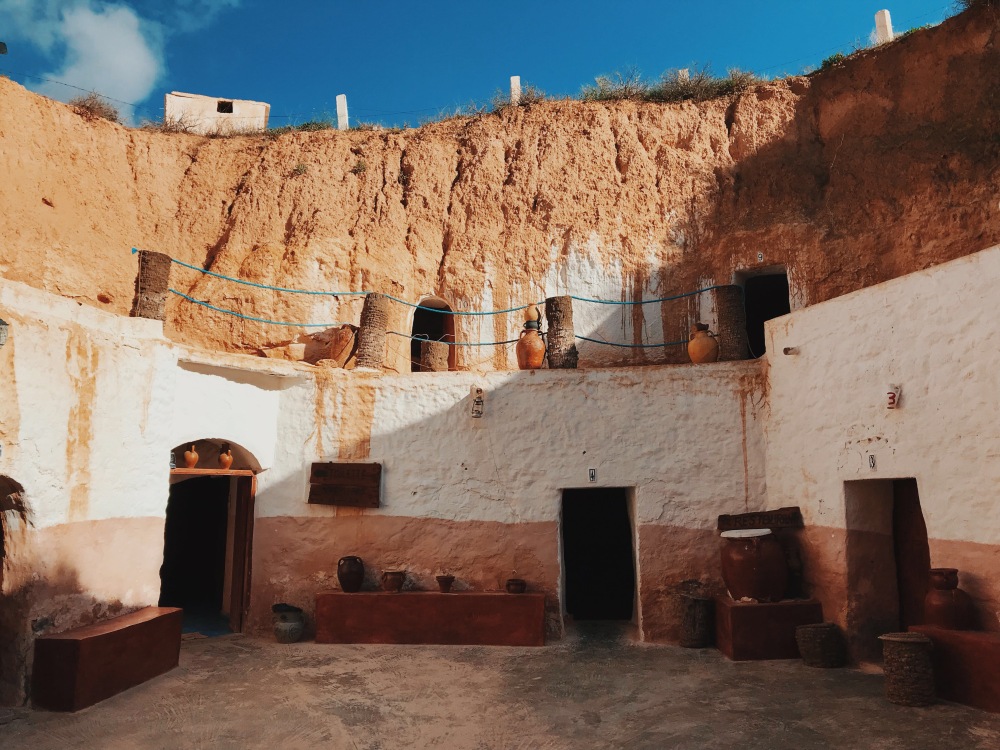 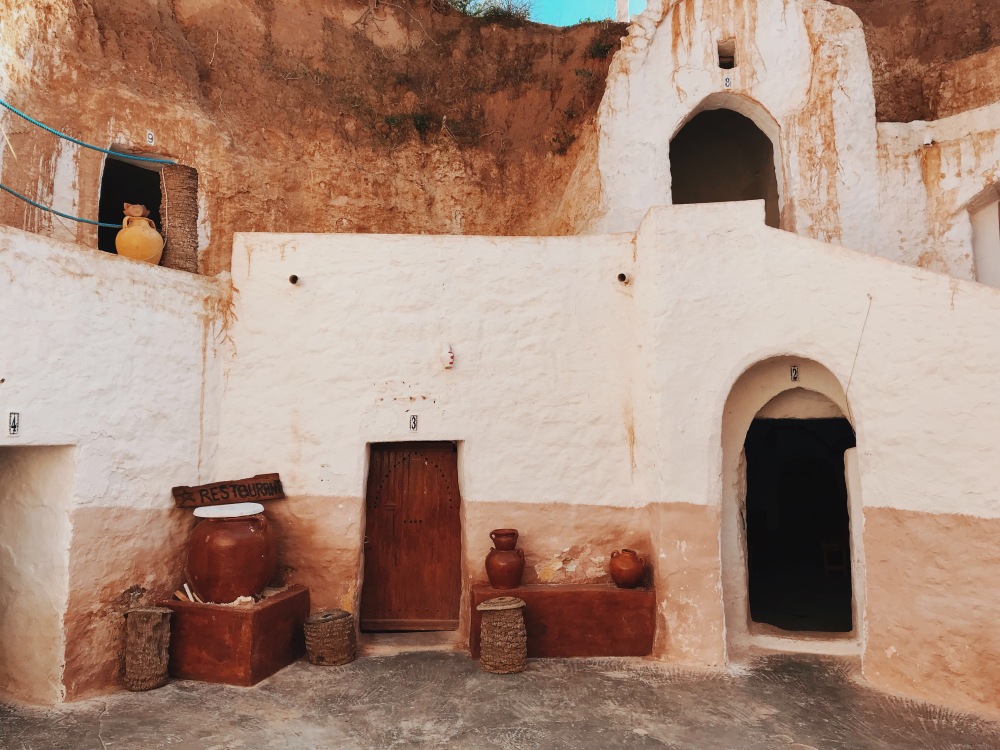 From Matmata to Gabes, the 6th largest city in Tunisia, then a train ride all the way back to Tunis, where we stayed in another gorgeous AirBnB for our final nights in the country. Pack up, head out, airport, boarding passes, flights, flights, touch down and back to our respective homes. One adventure finished, the next one to come. 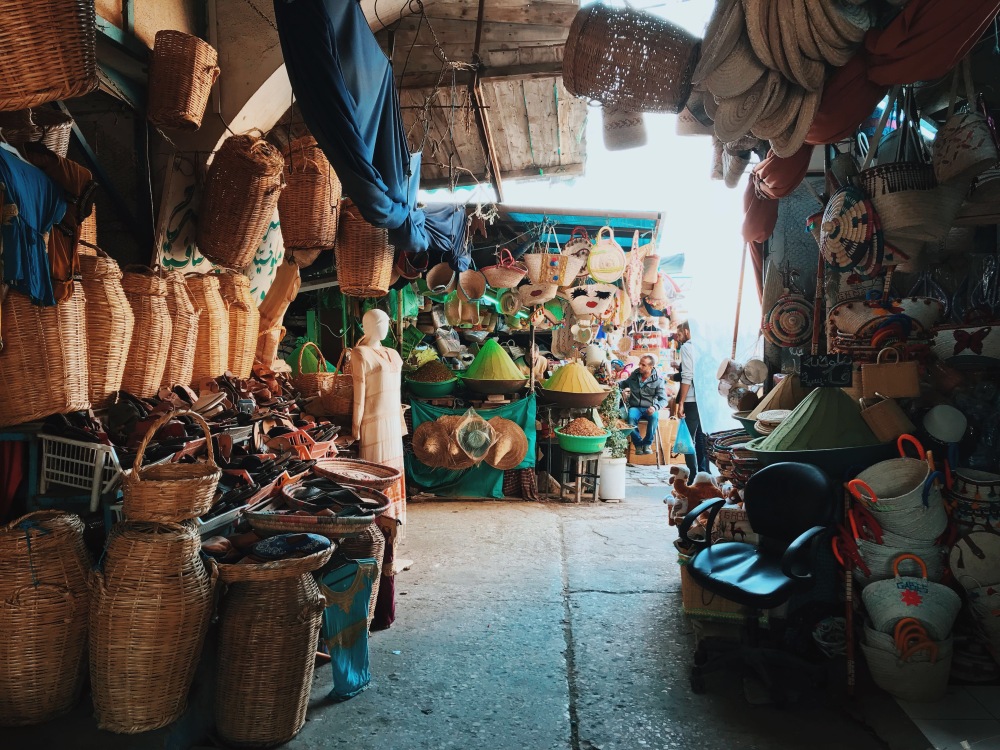 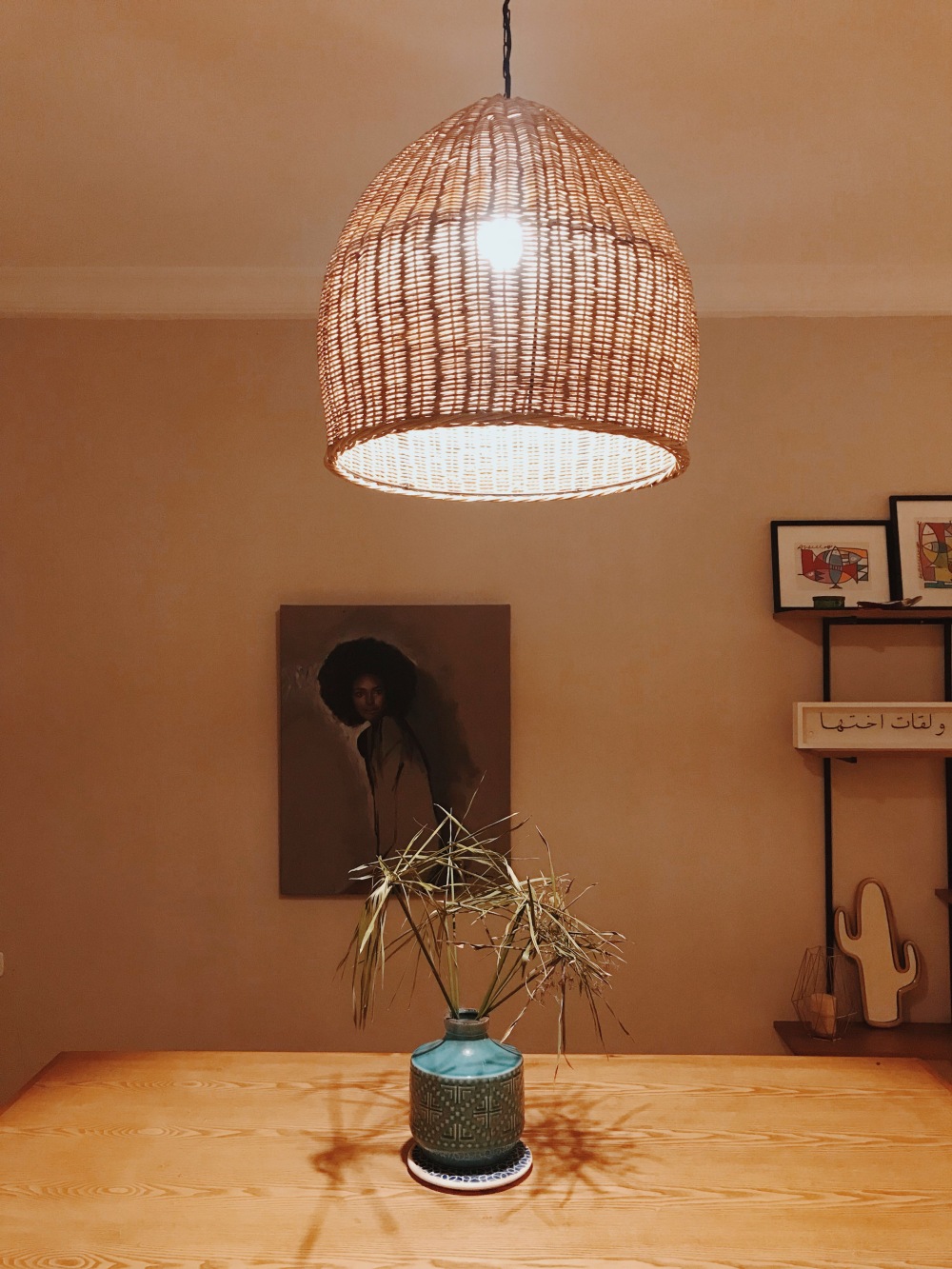 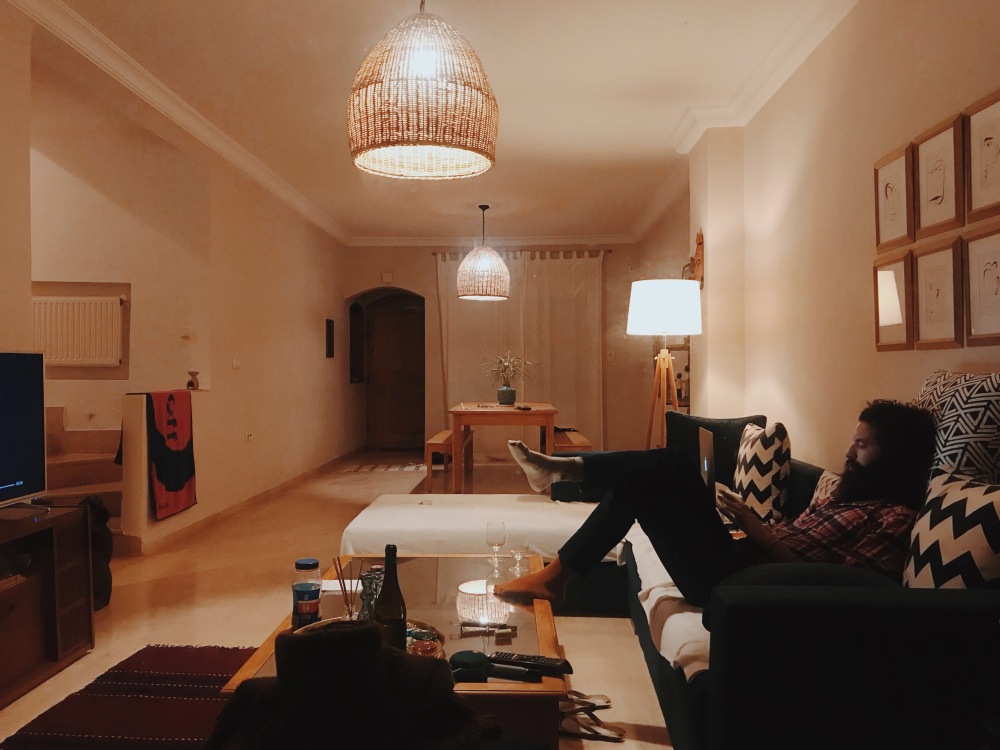 By the way, if you haven’t yet heard, we’ve now decided to undertake our greatest adventure yet. A few weeks ago, on Valentine’s Day, I proposed to Manchit. She said “yes,” thankfully (Not before some questionings of “Are you serious?” and “Really? Really?”), so we are now in the process of figuring out the when’s, the how’s, the where’s – among other important questions. Details to come, hopefully sooner rather than later, but with our busy island schedules, who knows how long it will take? Almost time for another tea, it seems, so we’ll chat again later 🙂

Shouting love from beyond the WiFi/phone networks, bouncing from island to island to you and yours.